Use Alternative and Descriptive Text

Let’s review several types of images, and then create alternative and descriptive text for them. Don’t be frustrated if the suggested text isn’t what you think is the best option. Remember, learning to create effective alt and descriptive text takes time, and there is no one right answer. Focus on clearly and concisely summarizing the image’s meaning for screen reader users, in whatever words you think work best.

Because decorative images do not add meaning to the content, set the alt text to an empty string: alt=“", and do not include descriptive text.

When describing an icon in your content, include descriptive text that identifies both the icon and its function and an empty alt attribute to avoid redundancy. If alt text is provided without descriptive text, screen reader users will likely have a better experience than other users. If it’s not possible to add descriptive text, make sure the icon is clear and understandable, big enough to easily see, and has alt text that provides the icon name and function.

The following example involves a search icon that’s part of the page content, as opposed to being an active element on the page, such as a selectable social media icon in the footer. Here are some descriptive and alternative text variations that provide various levels of meaning:

This image of the Salesforce Customer 360 Product Clock is highly detailed. It’s likely that the meaning of the image cannot be adequately summarized in 125 characters, which is the suggested alt text limit. Therefore, both descriptive text and alt text are needed to provide screen reader users with enough information.

Here are some examples of alt text for this image.

Now let’s look at an example screenshot to see what information to include in the alt and descriptive text. Make sure to focus on the details relevant to the context of the information surrounding the image.

Include information about features, functions, or tasks in descriptive text. Then use alt text to describe other important details about the graphic that aren’t specifically task-related but are needed by screen reader users.

In this example taken from the Configure Private Cloud Edition in Studio help documentation, the screenshot contains a callout, which should be explained in descriptive text. If there were numbered callouts, the descriptive text would include a list that describes all callouts with the corresponding numbers.

Perform the following steps to integrate your Studio installation with the Anypoint Platform components in a Private Cloud Edition (PCE) deployment:

In this case, the descriptive text that proceeds the image contains all relevant information for users to complete the task, but the screen shot also provides an example URL that cannot be seen by screen reader users.

Whenever possible, avoid images with text. Image text can’t be read by search engines or assistive technologies and can become blurred with magnification. If you must include an image with text for more than just visual effect, include all text in the image verbatim in either alt text or descriptive text.

If the image contains only text, the text alone can usually be used as the alternative text.

If the text in the image is included in descriptive text, do not repeat it in the alternative text. In this case, use the alt text to include meaning provided by the image that is not described in the surrounding text. If the image contains no additional meaning, specify an empty alt text value.

The following image is an interesting example because it contains more than one style of text. In this case, descriptive text is needed in addition to alt text to convey the image’s full meaning.

Alt Text Variations For A Salesforce Marketing Image With Text

When an image is the only thing within a link, use alt text to provide the destination of the link, not the visual contents of the image. The link destination is what a screen reader user needs to hear.

Image links can be accompanied by descriptive text, but don’t have to be.

The alt text for this image link would be set to: alt=“Salesforce Products Overview page”.

If link text that adequately describes the link destination is provided, and the image itself does not convey any additional meaningful information, an empty alt text value is used to avoid redundancy and repetition. For example: 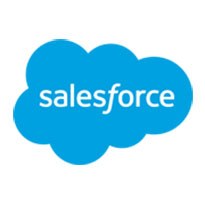 Let’s Sum It Up