Use a For Loop to Iterate Through a List

As you learned in Apex Basics for Admins, a loop is a block of code that is repeated until a specified condition is met. Loops allow you to do a task over and over again. Apex has three types of loops. You’ve used the while and do-while loops already. The third type is the for loop. A for loop iterates through items the same way as while and do-while loops, but it can also iterate through a list or set. (You can use for loops with SOQL too, but that’s for another day.)

In this unit, you learn about two types of for loops.

To review, while and do-while loops specify a condition that controls how many times a block of code runs. The loop ends when the condition is false. For loops do the same thing, but with simpler syntax.

Write and Run a Traditional For Loop

You should see five entries that show the number increasing from zero to four. 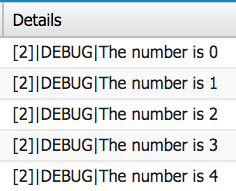 So, if while and do-while loops do the same thing as for loops, why do we use for loops at all? Two reasons:

Look at this example written as a while loop and again as a for loop.

The for loop code is more compact. It does the same thing as the while loop, but does it with three lines of code instead of five. Two more lines of code may sound like a small difference now, but when your org has thousands of lines of code, each additional line matters.

Write an Iteration For Loop

Let’s create an iteration for loop to work through this list.

Note that the tea list has the string data type. To declare the iteration for loop, we use the list data type (string) and the list name (tea).

This statement does two things before the loop begins.

We have the list declaration and the iteration for loop declaration. All we have to do is put them together with the loop body, and we’re ready to run the code.

Review the debug log. You should see three entries showing that we have Black Tea, Green Tea, and Chai Tea.

Well done! You’ve learned quite a bit. If you ever feel unsure about a concept, refer to Apex resources, such as the Apex Developer Guide. If you know where to find answers, and you commit to working through problems, Apex coding gets easier over time. Be patient. Happy coding!