The Issues Page in Trailmaker Release

Throughout the release process, as different contributors submit modules, badge art, graphics, and localized content, Marisol keeps an eye on release health. She’s always on the lookout for issues that can delay or prevent publication. 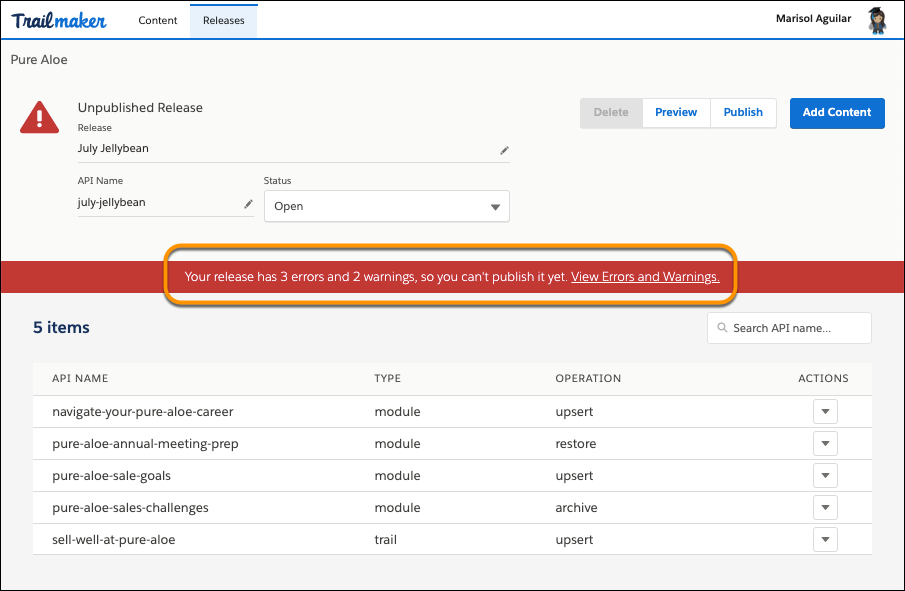 She clicks View Errors and Warnings on the alert, and that takes her to the release’s issues page, which lists the warnings and errors. She can click the down arrow for any module or trail on the issues page to see a description of the problems. 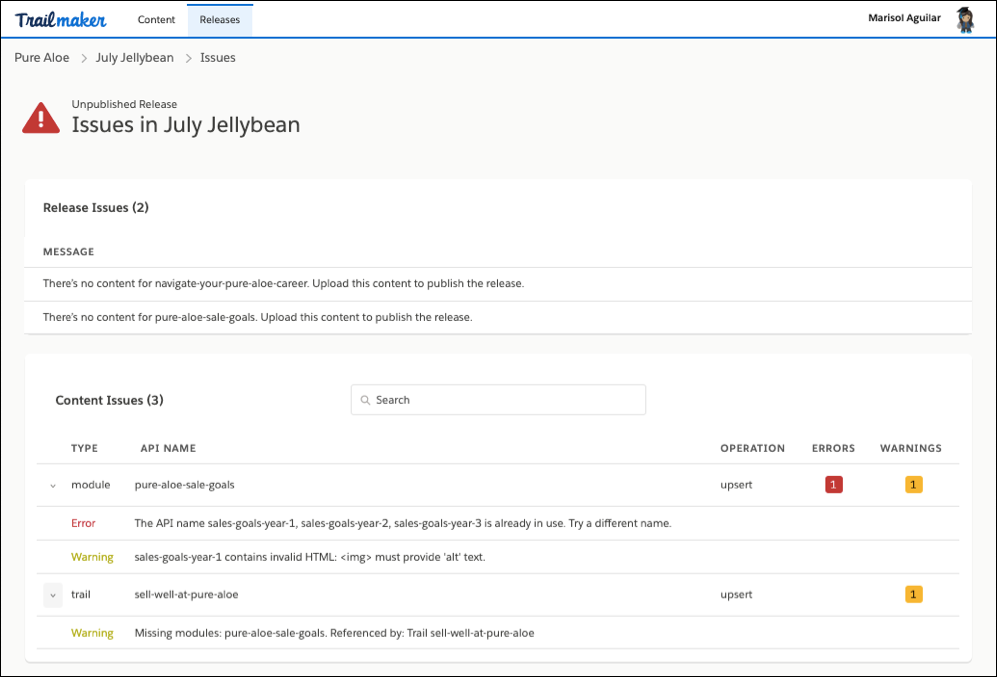 What’s the Difference Between a Warning and an Error?

Warnings indicate problems that, ideally, Marisol and Cindy fix before Marisol publishes the release. However, if they don’t fix these issues, Marisol can still publish the content. Errors are problems that block Marisol from publishing a release.

Some examples of warnings are:

Some examples of errors are:

Trailmaker Content catches a lot of problems before they even make it to the issues page in Trailmaker Release. That helps Cindy and Marisol avoid some errors and warnings altogether. For example, when Cindy goes to upload content to a release, a window alerts her if a module needs badge art, a unit needs a quiz, or any other necessities are missing. 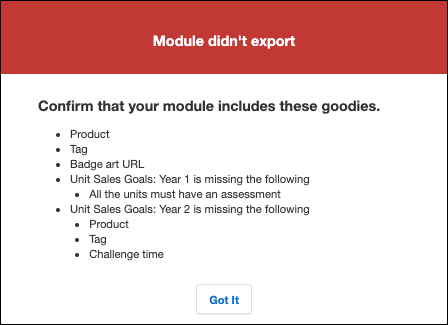 Cindy can fix those issues before she uploads the content to the release.

Most of the time, when Marisol does see errors or warnings in Trailmaker Release, Cindy is the one who can fix them. Cindy makes the changes in Trailmaker Content, then uploads the module or trail to the release once again. Marisol can confirm whether the errors and warnings have disappeared from the issues page in Trailmaker Release. And Cindy can check the content in preview mode, to make sure that everything is correct.

A banner on the release page in Trailmaker Release alerts Marisol when a release is OK to publish. 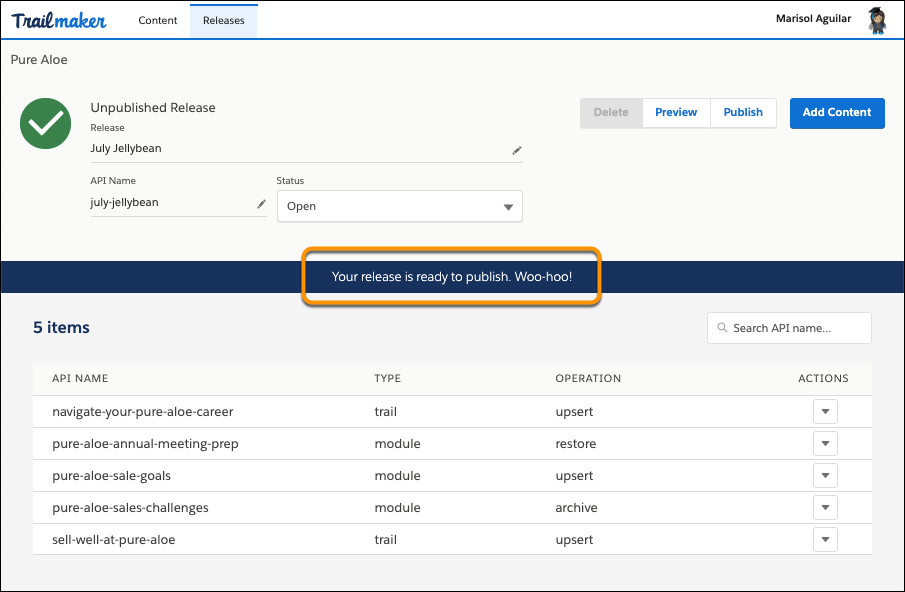 When Cindy confirms that the content is ready to go, Marisol has just one thing left to do. On the release page in Trailmaker Release, she clicks Publish. 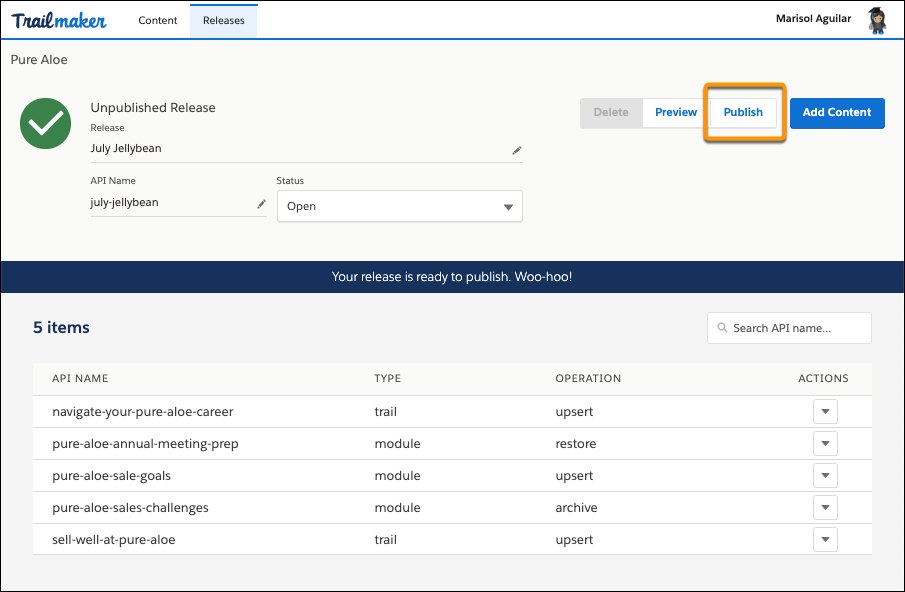 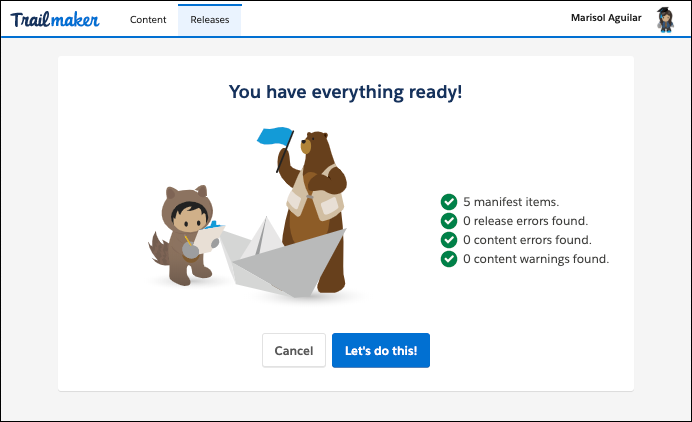 That’s it! With the click of a button, Marisol publishes all the content in the release. Another screen confirms that the release she just published is now the current release on myTrailhead. 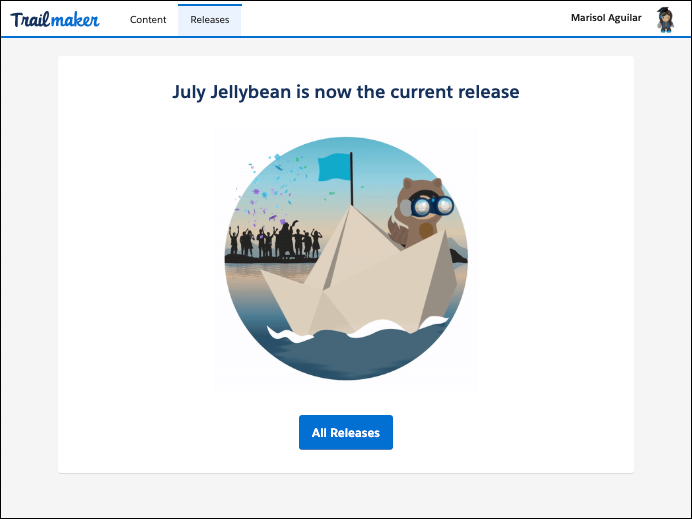 Marisol and Cindy have done it again: They’ve refined Pure Aloe’s myTrailhead offerings with new content and ensured that the existing content is still accurate and relevant. They can high-five each other and celebrate another job well done. And their colleagues can dig in and start earning more badges and learning new skills.